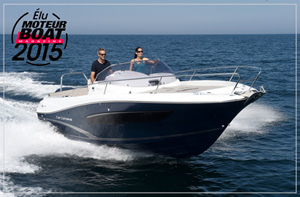 Cap Camarat, we would like to share with you new news from the legendary series that has been in production since 1982 and has reached more than 20,000 sales figures. Cap Camarat 7.5 WA Série 2 honored Jeanneau at the Paris Boat Show, receiving the "Motto of the Year" award in the daily sightseeing boat category.

In the first stage, the boats selected by the readers of the Motorboat Magazine remained in the final. The jury, consisting of readers, journalists and professional seamen, selects winners by scoring: Cap Camarat 7,5 WA S2!

This prestigious prize has also shown the importance of successful work between Jeanneau and the creator of Cap Camarat, Patrice Sarrazin.